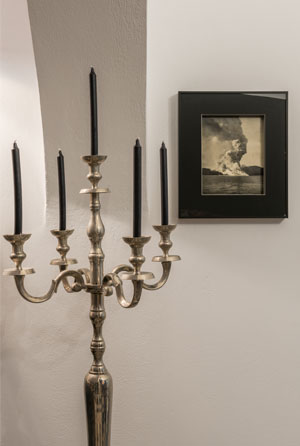 Situated in Fira, the Capital of Santorini, Coat of Arms is laid at the highest point of Fragomahalas delivering the most mesmerizing Caldera views.

The first Mansion was built in the beginning of the 18th century. Its completion took place before 1830 when the impressive second floor was constructed giving the mansion an iconic look. During that time, the mansion was home to a large collection of Archaic and Hellenistic artifacts that derived from the excavations made in Ancient Thira. Today, one is able to see those sculptures and ceramics in the Archaeological Museum of Fira as they were donated in 1956.

Francesco Delenda, had Spanish origins from Catalonia during the period of the Crusades and was the founder of the Greek part of the family. The family first arrived and settled in Athens in the 14th century and just after they moved to Naxos only to end up in Santorini in the 16th century, constituting them as the “Doukato tou Aigaiou” (Duchy of the Aegean 1207 – 1537). The family crest represents the title of an Earl as it bears a tower and a sword under the protection of a five-edge crown.

As the family had a long presence in Santorini many members had become representatives of European Countries such as Great Britain, Austria, France and Germany. Playing such an important role throughout the course of history, the family has hosted esteemed guests, the successor of Prussia and the Emperor of Germany, Wilhelm II, the archaeologist and the first excavator of ancient Thira, Baron Hillier Von Gertingen and King Otto of Greece and Queen Amalia in 1853, to name a few.

Recently renovated by the architect Marily Matinopoulou-Delendas the Mansion provides guests with a significantly upgraded experience whilst retaining the intimacy of its history.

Even after more than 600 years, Coat of Arms still offers breathtaking views of the most photographed corner of the Aegean Sea and enhances the wondering experience purely by offering renowned Greek Philoxenia.